The outbreak of COVID-19 in carceral facilities, be it jails, prisons, or immigrant detention centers, is a uniquely American epidemic within a pandemic. Public health crises in carceral facilities have long preceded COVID-19. These facilities regularly experience outbreaks of diseases, such as hepatitis and tuberculosis. The physical design, tendency towards exceeding capacity, and unsanitary, inhumane conditions create the environment for the quick spread of any disease. It is no wonder that these facilities struggle with COVID-19, but this pandemic heightens the dangers and risks, primarily for those incarcerated, but also for surrounding communities. People incarcerated and detained report being denied COVID-19 tests due to a shortage and as a result many speculate that COVID-19 positive cases are being underreported.

To me there’s, because of COVID, there’s some immediate stuff that just feels like, «God, we’ve got to knock this out, get this done.» To me, it’s just like, why are folks still in prison? And with the increase of COVID spreading, the detention centers, all the stuff that is really perpetuating and becoming a cesspool of spreading. And so many people work in those areas, so they’re coming in and out. It’s not like it’s contained… I think sometimes people think it’s like a contained space, but there’s so many workers that come in and out. It’s the same thing… ‘cause I think the Governor recently put out that he wants to close down all the youth jails. And so to me, let’s get moving.
Lian Cheun

On any given day, Los Angeles jails house from 16,000 to over 25,000 people in the largest jail system in the world. Nearly half of this detained population is awaiting trial. With every day spent in pretrial risk, people separated from home risk losing employment, housing, and, in many cases, children while in detention. The longer a person is detained pre-trial, the greater the likelihood of later arrest. This effect is particularly significant for low risk defendants – even 48 hours in jail was shown to increase recidivism for first-time offenders by almost 40 percent. The median length of pretrial detention in County is ten days – a long enough time to interrupt a stable person’s responsibility, but yet too short to provide meaningful interventions to those who have high-needs. Incarceration is a disproportionate punishment in Los Angeles.

People in County jails come from overpoliced, under-invested neighborhoods, primarily South Central, Compton, Long Beach, and Antelope Valley. The County jail population is overwhelmingly Black and Latino. Black people make up less than 10 percent of the County population, yet 29 percent of the jail population is Black and similar to trends nationwide, women’s incarceration is increasing. In Los Angeles County, Black women make up one-third of the women’s jail population. To move forward, incarceration must be recognized as a source of oppressive discrimination.

Still, the State and County have made some strides towards some alternatives and breaking from this unsustainable and dangerous reliance on incarceration. Since 2015, the County has taken bold action to adopt a “Care First, Jails Last” approach for those impacted by the justice system. The County moved to break away from inefficient and racist incarceration practices, declaring that the County should provide care and treatment whenever possible. Last year, Governor Newsom banned for-profit carceral facilitates in California, including immigrant detention centers. Yet critical challenges remain.

We need a community-based system of care in place of County Social Services.

Over half of the pretrial population have a severe mental illness deemed appropriate for release to community-based care, yet continue to remain detained

In Los Angeles County Jail alone, researchers estimate that 3,322 additional deaths would result in the surrounding community if an epidemic occurred within jail

The report puts forward 11 recommendations for policy and practical action.

The closing of Men’s Central Jail (MCJ) calls for new construction of supportive housing (corresponding to the number of people caged at MCJ).

Create and publicize a protocol to support people released from jail to meet physical needs and emotional needs in a way that promotes public health.

Centralize COVID-19 resources to increase coordination and access for service providers navigating the release of people from jail. 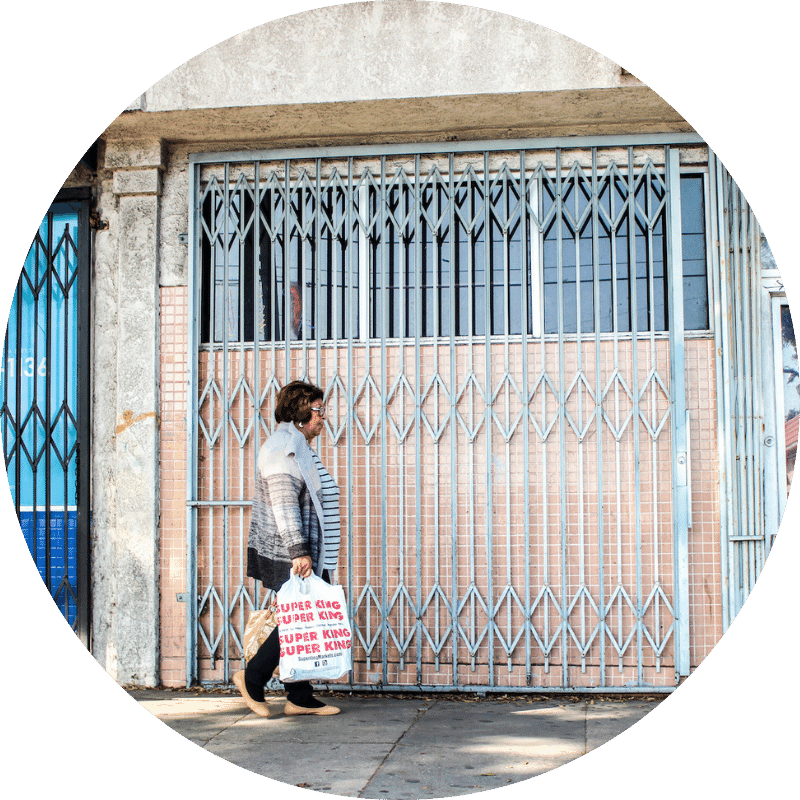 “I send this child off to college. So, he goes from the hood to Humboldt State, which is a great transition. And he deals with racism and he’s calling me and he’s telling me, mom, I don’t know how to deal with this. They said this to me, they reacted like this. Even my white friends who aren’t racist, they don’t know how to respond when the racist remarks come or when the police come and I feel so afraid that my phone is by my leg. And wondering if they’re going to shoot me because my phone is by my leg.”
Focus Group Participant
To learn more download the full No Going Back LA report (PDF)
Previous Topic: Immigrants
Next Topic: Non-Profit Sector